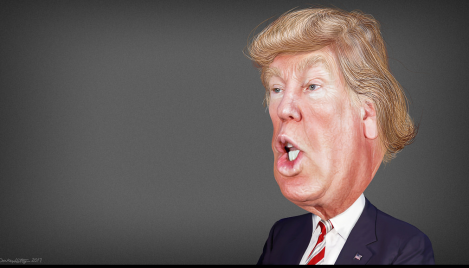 By Craille Maguire Gillies. Scroll down for excerpts from this story. Read the full piece on the Guardian’s website.

The week after the 2016 US presidential election, the podosphere was full of black Americans expressing their fears for the future, diehard Democrats wondering what went wrong and rightwingers telling us what they had known all along. Listen widely enough – left, right and “alt-right” – and you get a true state of the nation address right in your earbuds. Here are a few of the political podcasts that will make you laugh, cry or hurl things at the wall – but above all, live through the next four years or more.

The podcast that was meant to end when Hillary Clinton was elected. But here we are, so Jacob Weisberg’s weekly pod endures, with Virginia Heffernan joining as co-host. Even if you think you can’t handle an entire 30 minutes devoted to the man described as a human Cheeto, this is undeniably entertaining stuff, with enough outside voices – whether it’s Russian-American journalist Masha Gessenor a psychologist explaining the signs of narcissistic personality disorder – to keep it fresh. Plus you get the uncanny impersonator John Di Domenico reading out the Cheeto-in-Chief’s unvarnished tweets.
Good for: media junkies.

Ann Friedman and Aminatou Sow discuss the state of America while thousands of miles apart. Their long-distance chats range from Trump’s dossier press conference to the “Kanye-Kardashian-Blac Chyna-Amber Rose octagon”. If you think there’s a dearth of women on political podcasts, you’re right. But it shouldn’t be so: they discuss the week’s news with a mix of anger and optimism, and interview female leaders in tech, media and politics (including Hillary’s right-hand woman, Huma Abedin). Plus, they put their money where their mouths are, advocating for women’s rights and cautioning against apathy. Raging but joyful rants between friends.
Good for: millennials, especially those they affectionately call “baby feminists”.

Last March, four former Obama aides went from the Oval Office to the podcast locker room, churning out chummy campaign analysis on Keepin’ It 1600. But as Trump moves into 1600 Pennsylvania Avenue, these well-connected politicos have just launched Pod Save America to usher in the new era. There will be Democratic soul-searching, shoptalk and the occasional dig at the “crooked media”.
Good for: anyone who had an Obama 08 bumper sticker.

Predictions wizard Nate Silver has long been revered as a god among data scientists, but the many faithful might have wavered on 9 November when Silver’s team owned up to their failure – and many others’ – to call the US presidential election. But their analysis here of everything from Putin to the midwest electoral college (fun stuff, folks!) is full of context and colour. Following an especially heavy historical analysis of public opinion, one panellist concludes: “We still don’t want to get a beer with Russia!”
Good for: numbers nerds.

This weekly confab between Pulitzer-winning critic Wesley Morris and his friend and fellow New York Times writer Jenna Wortham is not, strictly speaking, all about politics. So what are they still processing? Being black in America, for starters. Also: queer life, anything inspiring/troublesome in pop culture, Beyoncé v Adele and more. Times colleagues make frequent appearances, and the duo also take the occasional field trip. (If ever there was the correct use of the word “poignant”, it would be to describe their tour of the Smithsonian’s new National Museum of African American History and Culture – or the Blacksonian, as they dubbed it.)
Good for: critical thinkers.

A perennial favourite that rips through the week’s headlines with thoughtfulness and expertise, if not impartiality. New York Times writer Emily Bazelon, Face the Nation’s John Dickerson and former Slate editor David Plotz face off on the senate (could they repeal Obamacare?), the supreme court and how to talk to your kids about Trump (“can you say sexual assault”?). The panel often swerves off course, too, recently addressing the time-old question: “Would you rather marry Ted Cruz or Tom Cruise?” They decided both aranorake “odious”.
Good for: political anoraks.

Beware the host who refers to himself in the third person: “A lot of people will say, well, Hannity, you’ve changed your views on Julian Assange,” says rightwing radio’s Sean Hannity at the start of his interview with the WikiLeaks publisher. Assange comes across as a zen master compared to the amped-up Hannity, who never heard an opinion of his own he didn’t like. If you’re left-leaning and want to find out what mainstream rightwingers are thinking, start with his New Year’s Eve best-of 2016 show.
Good for: lefties willing to pop their own filter bubble.

Miss the nails-on-chalkboard sound of talk radio? Then meet the man Obama personally took to task on his way out of the White House on this rapid-fire edit of his daily syndicated radio show. Expect shouty monologues about climate scientists (“who believe global warming is settled science”), the “Obama regime” and George Lucas. (After Lucas’s museum plans in Chicago fell through, Limbaugh said: “Lucas is going back to deal with the wackos in California – better the land of fruits and nuts than the liberal evil empire [of] Chicago.”) Someone give the man a soapbox. Oh wait …
Good for: misanthropes.

Milo Yiannopoulos wants to make you laugh … about Islam. “Islam is a rich, unplumbed depth of comic potential,” says the British self-appointed “supervillain” for Breitbart. To wit: “Is there anything more darkly funny than a religion that, when provoked with cartoons, responds with AK-47s?” But Louis CK he is not, and whether he’s spouting Wittgenstein (in German) or calling for more guns (to stop mass shootings, obviously), this provocateur for the alt-right – the anti-establishment far-right movement in the US – is not really trying to finesse his standup act, but rather to “test the boundaries of what polite societies will possibly tolerate”. There may be danger in listening, so download at your own risk. We are not responsible for listening devices dashed against walls.
Good for: hopefully no one.