An ode to London’s native wildlife

Published in the December 2012 issue of Canadian Geographic

The lights of the London Eye blinked a 10-second countdown to midnight — 9 . . . 8 . . . 7 . . . 6 — to mark the beginning of 2012. I was on the middle of Waterloo Bridge, huddled under an umbrella. I rubbed from my eyes flecks of firecracker paper that sailed over the Thames and turned to spend two hours inching toward Waterloo station with thousands of others. The street leading to my flat was quiet and empty in the early hours of the morning. I pulled up the collar of my coat against the chill. A quarter moon hung overhead. And then I saw it: the flash of fur and a tail. A fox. Specifically, vulpes vulpes — the red fox.

I had moved to London from Saskatoon, Saskatchewan, that autumn, and soon started to track fox sightings the way tourists might track glimpses of the Royals. There they were, leaping across stone walls, jumping through hedges, a tawny one sauntering down the sidewalk toward a bus stop, ears perked to traffic. One night, I watched a fox chow down from a takeout container outside a kebab shop. Walking to an Underground station on a winter’s morning, I saw a fox run across the road toward an apartment building. It was quickly trapped in a concrete jungle. I thought I saw a mix of fear and confusion flicker in its eyes before it backtracked down a residential street toward a park.

There are more than 30,000 foxes in London. They are said to have arrived as the suburbs expanded in the 1930s, taking up residence in newly established gardens. By the 1940s, some Londoners reportedly kept these diminutive creatures — not much heavier than a well-fed house cat — as pets. In recent years, foxes have made appearances on a rugby pitch during a Six Nations match, on the Circle line of the Tube and in the upper-floor bedroom of twin babies in East London. In 2011, a fox lived for several weeks on the 72nd storey of Europe’s tallest building, The Shard. The animal was captured, checked by a vet and released onto the streets of south London under the cover of night. The founder of an animal centre told the BBC: “He glanced at The Shard and then trotted off in the other direction.” 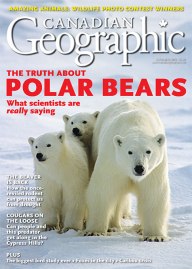 Foxes are to London what white-tailed prairie hares are to Edmonton or magpies are to Saskatoon or raccoons are to Toronto. “I see them everywhere,” said a Scottish friend dismissively when I told him of another sighting. For me, they were a sign of wild in a city of more than eight million people. When a family of cubs moved into the large communal garden behind my flat, I watched, mesmerized, from my kitchen as they tumbled across the grass like children. By the time the neighbourhood awoke, they had retreated into the trees, but there they were back at 10 p.m., the mother nose to nose with a neighbour’s Staffie that was corralled behind a wooden fence. The mother screamed what sounded like death. The dog barked crazily.

By summer, I began to think of myself as a Londoner. Oh, there’s another fox, I thought each time I saw one traipsing around. When a fox turned up at a barbecue, it sat patiently, watching or begging. Then one night at dusk, on a short jaunt to the park at the end of my street with my golden retriever, I noticed a shadow a few feet off. A small fox, not much bigger than a terrier, slipped through the iron fences, keeping pace. I crossed the road, and the fox waited for us on the sidewalk as passersby stared at it. I headed back to my flat, and the fox tagged along. I quickened my step; it quickened its step. I lunged at it; it skittered away but kept following. Should I be intrigued or afraid? My old dog, stiff with arthritis, lumbered on unaware or unbothered.

I picked up speed as I neared my front door, and tried to remember what one should do in the wild. If this were a bear, was I supposed to run or not run? I turned into my front garden, slammed the iron gate behind me, fumbled for my keys and dragged my dog inside the building. I looked back. The fox had disappeared into the night.

+ Read more from Canadian Geographic – The Slow Life: On the trail of Lewis and Clark